The picture on this postcard represents one phase of harvesting hay or small grain crops[1].

The first step was to cut the plants and form windrows - long low ridges or lines of hay or a similar crop, designed to provide good conditions for drying. This could be done with a swather that both mows and arranges the hay into windrows. Alternately, the crops could be first mowed and then a windrow machine or a hay rake could be used to form the windrows.

In the background is a hay rake, a wide horse-drawn long-toothed rake, that could be used for creating windrows and/or for gathering hay from a windrow and carrying it. So, probably in this case, the hay was first mowed and then raked into windrows. 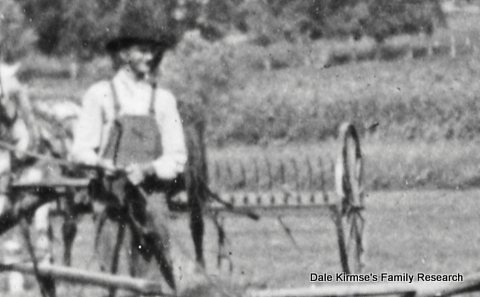 Once the hay has dried, the windrows are picked up with hay sweep or buck rake[2], sliding forks drawn by a pair of horses such as seen here:

These fork loads of hay were placed on the lifter/dump fork of the beaverslide, hoisted up and dumped on the hay stack.  The men on the stack had to arrange and distribute the hay such that the pile was windproof - stable against turning over, and waterproof - the pile shed water from rain and kept the stack inside dry. 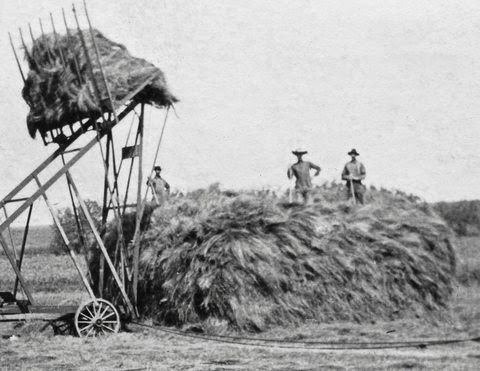 Note that long lines from the beaverslide to the horses used to raise and lower the lift/dump fork. 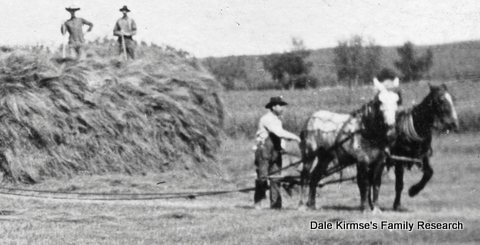 A video of horse-drawn haying at Grant-Kohrs Ranch National Historical Site illustrates the harvesting operation shown on this postcard:

You might also enjoy viewing a video of haying time based on century old home movies:

Believed to be in Nebraska.


Unidentified. The faces of the men are too small to see even when highly magnified. Possibly someone will recognize the picture and identify the farm and/or crew members.